This is a beautiful and creatively designed natural Nepalese lokta paper greeting card with envelope. Avalokitesvara is the lord of the six syllable mantra “Om Mani Padme Hum”.

The first word Om is a sacred syllable and means the vibration or sound of the universe and represents divine energy that purifies the ego. The word Mani means “jewel” or “bead”, Padme is the “lotus flower” (the Buddhist sacred flower), and Hum represents the spirit of enlightenment. As you can see, this is a powerful mantra with a lot of meaning behind it. The one phrase that is said to sum it all up is this: “The jewel is in the lotus,” or “Praise to the jewel in the lotus.”

This is to say that within all of us is the lotus flower, it’s just covered up by a lot of mud and muck. Reciting this mantra over and over again, with the right intention, is believed to get rid of the mud and muck until we are as sparkling, pure, compassionate and wise as the lotus flower itself.

Four armed Avalokitesvara is white in colour carrying rosary in the right hand and a lotus in the left. The other two principle hands are raised to the chest with the palms enjoined in Namaskar Mudra with a round object known as a ‘jewel’ which is regarded a a symbol of knowledge.

Lokta is a shrub that grows on the southern hillsides of the forests of the Himalayas between 5,500 and 13,000 feet of altitude. It is traditionally used in Nepal to produce paper. Lokta paper is a renewable resource and a source of income for agricultural communities. A very unique and lovely card helping to support crafting families. 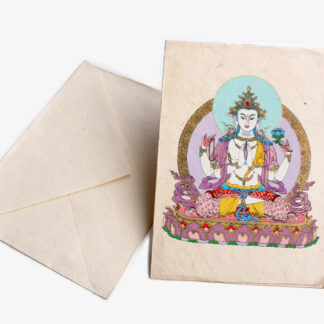