This is a beautiful Green Tara cotton prayer flag handmade in Nepal. An image of Green Tara is printed at the centre in a yellow print along with associate mantras. Traditionally, prayer flags are used to promote peace, compassion, strength, and wisdom. Tara is called the goddess of compassion and the mother of liberation. However, the energy of Tara also encompasses action as reflected in success or specific achievements. These are not necessarily worldly achievements.

As green is the universal color of healing, regeneration, and growth, the Green Tara embodies the healing energy of release from fear and ignorance. Human ignorance comes in many forms—from jealousy to pride—and it’s the healing energy of Green Tara that brings awareness and relief from these negative aspects. Green is also the color of vibrant energy and activity, which explains one of the aspects associated with Green Tara as the goddess of action. She is often depicted with her right leg extended forward—ready to spring/move forward at any moment.

Another aspect of green color is the freshness and newness of energy, which reflects Green Tara’s youthfulness and playfulness. However, the main feature of all Taras—no matter which color expresses their specific energy—is Tara’s pledge to being in female form.

His Holiness the Dalai Lama mentioned this about Tara:

“There’s a true feminist movement in Buddhism that relates to the goddess Tara…she vowed, ‘I’ve developed bodhicitta as a woman. For all my lifetimes along the path I vow to be born as a woman, and in my final lifetime when I attain Buddhahood, then, too, I will be a woman.'”

The flags do not carry prayers to gods, which is a common misconception; rather, the Tibetans believe the prayers and mantras will be blown by the wind to spread the good will and compassion into all pervading space.By hanging flags in high places the Lung ta will carry the blessings depicted on the flags to all beings. As wind passes over the surface of the flags, which are sensitive to the slightest movement of the wind, the air is purified and sanctified by the mantras.

The prayers of a flag become a permanent part of the universe as the images fade from exposure to the elements. Just as life moves on and is replaced by new life, Tibetans renew their hopes for the world by continually mounting new flags alongside the old. This act symbolizes a welcoming of life’s changes and an acknowledgment that all beings are part of a greater ongoing cycle.

These prayer flags can be hung above small altars or above a doorway indoors or could be hung on a balcony, on a shrub or between two trees that are close together.

When the prayer flags and mantras have faded away, put up a new prayer flag. If you no longer want the old one to keep hanging alongside the new one, safety burn or bury them respectfully, as is the Tibetan tradition.
216 cm long
Individual flags are 20 x 20cm 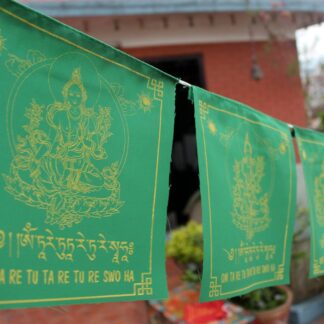