Incense is made as a pleasing offering to appease a deity, god or spirit. These incense sticks have been prepared according to the formulation prescribed by Pema Karpo the great yogi of the Drukpa school of Buddhism, Minling. This incense is a blend of about one hundred precious aromatic substances like clove, nutmeg, saffron, red and white sandalwood and other medicinal materials. This incense has been prepared by hand with utmost care and in strict compliance with an age old traditional method by Mr. Nado at Nado Poizakhang, Thimphu, Bhutan.

This is an amazing smelling incense and different to the Tibetan incense. Its very complex and I think different herbs have been used specific to the country. This incense has a beautifully rounded sweet, spicy and warm scent that is very exotic and comforting. It is a bigger box of incense with a heavier weight of 100g.

Nado Poizakhang was formed to take advantage of the rich experience and great reputation enjoyed by its founder Mr Nado. Mr Nado started making incense with the encouragement of his abbot, the Gelong Nerchendrep Tshering Dorji. Mr Nado’s training encompassed both the ingredients that go into incense making as well the correct spiritual manner by which the sticks and powders are made. Because of the close relationship between our Royal Government and our Buddhist way of life, Mr Nado then managed the Government’s incense factory. In 1990 the factory was privatised and Nado Poizakhang was formed. In line with his Buddhist nurturing philosophy Mr Nado has encouraged many of his workers to leave and set up their own incense making businesses. Mr Nado is rightfully considered the father of Bhutan’s commercial incense industry.

Nado Poizokhang is the oldest and the largest hand-made incense sticks manufacturer in Bhutan. It was a government owned unit until the early 1990s. When the Royal Government started privatising most of the government owned organisations Nado Poizokhang began to commercialise in the year 1991. It is a family business managed by family members while providing employment for 15 poor, uneducated, and underprivileged people. We work closely with the Community Based Sustainable Management of Medicinal Plants Project that educates collectors in the sustainable collection and cultivation of the natural products that we use.

Nado Poizokhang produces nine varieties of incense sticks and two types of incense powder using about hundred types of natural herbs and medicinal plants, mostly grown in mighty Himalayas. The formula used in making this incense is as old as 700 years. Therefore, the use of chemical or environmentally hazardous substances have never been used in our incense. The incense from Nado Poizokhang is acclaimed within and outside Bhutan. Today, it is known in Europe, the United States, throughout Asia and beyond. 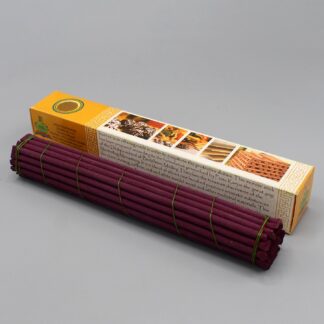